It took a year to build the house and a little extra to finish this, but much like Neutrogena, the kitchen certainly got an energizing boost from copper. 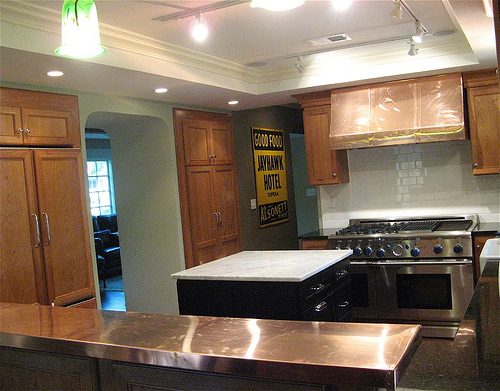 The range hood and bar counter were made by a local metal artist who does incredible work. For him the actual fabrication was child’s play – dealing with people rabidly ready to finish a house was another matter. 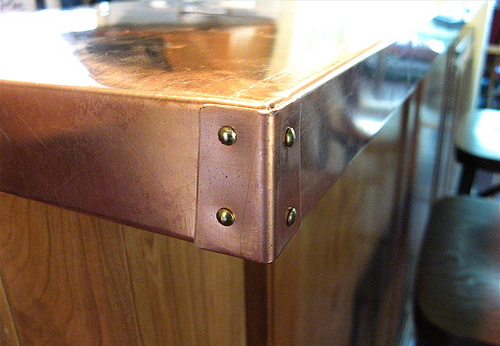 We used copper for its traditional restaurant feel, its durability and ease of maintenance – as in, I won’t clean the hood unless it’s covered in bio-hazard. And if that happens, I’ll have fled the house anyway.

We emphatically said no to a chemically enhanced patina, but now we’re impatient to dull the mirror finish. I’m just going to import a bunch of elderly French cafe dwellers to smoke, drink and age the thing.

Ron the Metal Artist said that every time you touch copper you create patina – and since we’re not so big on shiny, there was a lot of palming and rubbing after that. He also mentioned we could alter the texture ourselves with all kinds of tools – swell idea, Ron! Now you can pretty regularly drive by and see three nutjobs attacking a range hood with, respectively, a whisk, a lemon zester and a Scotch Brite.

Why is the finished kitchen in rare form?

Well, everything had been cleared out for the installation, and the photos were taken right after that. It’s rare to see nothing in the kitchen – no peaches rolling off the counter, no dog treats in the corner, not even a blue teapot on the stove. All I left out was the holy trinity of two rolling pins and Bluey, my long German knife.

My friend Joel is always accusing me of Martha-ing up by not showing the uglies, but…wait a minute… 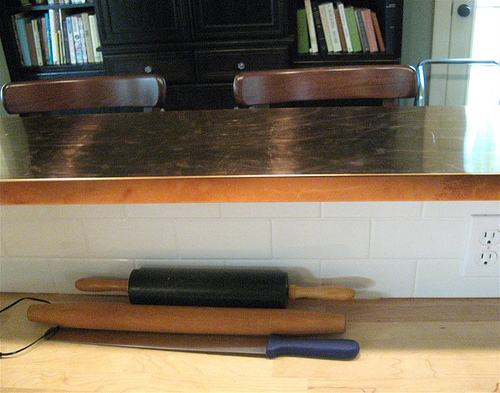 There. You’ve got my cell phone cord in this one. Would Martha show you that?