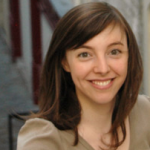 Clotilde Dusoulier is, by any measure, living a pretty dreamy life. She resides in the beautiful Montmartre section of the all-beautiful Paris, where she spends her days working on the deliciously popular blog Chocolate & Zucchini.

Started in 2003 to give friends a break from “hearing about what she had cooked/eaten/baked/bought,” it catapulted into the emerging online food world, leading to a media flurry of articles, awards and ultimately, a book deal. Chocolate and Zucchini: Daily Adventures in a Parisian Kitchen was published in May, 2007 and Clotilde’s Edible Adventures in Paris followed in April, 2008. Clotilde still frequently blogs on all things edible – just in time for summer, she’s currently showing some very, very attractive pistachio gelato.

I decided to interview Clotilde after a recent a-ha! moment in Paris. Wandering through an outdoor food market, I came across an iced heap of small conch-like mollusks I couldn’t identify, but something about their swirly shells and meaty good looks rang a bell. 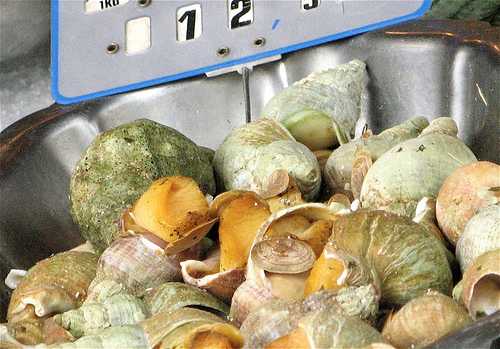 So that’s what they are! Bulots at the Place Maubert.

Bulots. Yes, I thought, bulots – kind of a whelk, and good with garlic.

Now I’d like to think I know plenty about cooking sea creatures, but in fact, I’d only recently learned about bulots on Chocolate & Zucchini. Some months earlier, I’d read how Clotilde had stopped at a market, and inspired by a similar briny heap, had scooped some up for a lovely lunch of steamed shellfish, greens and buttered bread. I remembered her pondering how fortunate they were to have so much good food so easily available, and in the market in Paris, surrounded by baguettes and bursting vegetables and silver fishes, I thought yes. A dreamy good life, indeed.

Clotilde noted that she was happy to help out on the shellfish ID, and could she contribute a slightly shortened Tell Simmer? Why, oui! Enjoy Clotilde right here at half-simmer; check out Chocolate & Zucchini for the rest.

What’s the most memorable breakfast you’ve ever had? What made it special?

It was at a chambre d’hôte (the French B & B) in a small castle in the South-West of France, where Maxence and I stayed a few summers in a row: breakfast was served in the garden, by the pond, and the host prepared something fresh and delicious every morning — for instance, there would be baguette and croissants from the village bakery, local cheese, butter, and cured ham, homemade jam, and a strawberry salad with sugar-dusted fritters. The B & B is no longer in operation, sadly, but the breakfast lives on in my mind.

You’re throwing a dinner party for friends on their first night in Paris. What will you serve?

The specifics depend on the season, but we’ll start with a pre-dinner drink and a few nibbles at the bar, before we move on to a simple main dish, most likely something stewed or baked that requires little last-minute attention and can be served family-style. Then we’ll have a cheese platter and a green salad, and we’ll finish with a scoop of homemade ice cream or sorbet, served with cookies of some sort. I received an ice cream maker for my birthday last year, and I don’t think I’ll ever tire of playing with it.

Don’t give two figs about homemade ice cream? Certainly you would if you could get such beautiful figs. Try Glace aux Deux Figues and see.

Tell me about your worst kitchen disaster.

The first few times I tried to make no-knead bread after Jim Lahey’s recipe. Everyone insisted it was easy and 100% fail-safe, yet I couldn’t get the recipe to work, in part because of the cup measurement of the flour. I produced a few bricks that ended up in the trash and shed a few tears of frustration, but I’m glad I kept trying because it really is easy and fail-safe — once you get the hang of it.

Three things that are always in your refrigerator:

If you were a cocktail, what would you be?

Who inspired you to cook, and what’s the most important thing they taught you?

My mother and my paternal grandmother are the two persons who have most influenced my cooking, and perhaps the most important lesson they’ve taught me is that it is possible, and admirable, to find the energy and soul to cook for your family every day of every week, for your entire adult life. 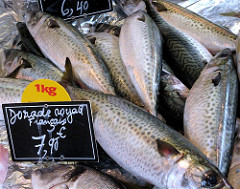